COSTS AND EXPENSES OF ADJUDICATION

1. One of the most commonly asked questions by intending parties to adjudication is what will it cost and who pays?

2. The answer is not straightforward and, other than in respect of the Building Disputes Tribunal Fixed Fee Low Value Claim (LVC) Service,[1] the cost of adjudication is dependent on a number of relevant factors all of which are outside the control of the adjudicator including, in particular:

a. the nature and number of matters in dispute;[2]

b. the complexity of the dispute;[3]

c. the nature and volume of documents provided by the parties;[4] and

d. the manner in which the claim and response (and any reply and rejoinder) are presented.[5]

3. There are two elements to the costs that parties might incur in relation to any adjudication: their legal and expert costs and expenses (if any),[6] and the adjudicator’s fees and expenses.

4. Consistent with the general purpose of the Act,[7] the presumption/default position under the Act is that the parties will bear their own costs and expenses and contribute to the fees and expenses of the adjudicator in equal proportions.[8]

5. However, in making a determination, the adjudicator has the statutory power/discretion to depart from the default position and determine that a party’s legal and expert costs and expenses must be met by any other party and/or that the parties are liable to contribute to his or her fees and expenses in any proportions that the adjudicator may determine. 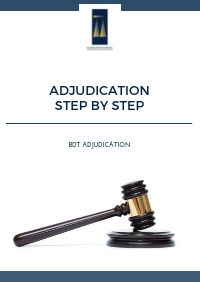 6. The power to determine liability for the costs and expenses of a party in adjudication proceedings is addressed at section 56 of the Act, which provides:

(b)           allegations or objections by that party that are without substantial merit.

(2)           If the adjudicator does not make a determination under subsection (1), the parties to the adjudication must meet their own costs and expenses.

7. Any agreement by the parties, whether by way of standard terms of contract or by separate agreement made before a dispute arises, as to how costs are to be apportioned or that one party will indemnify the other in relation to those costs, is not binding on the parties or the adjudicator.[9]

8. The power to determine the apportionment of the adjudicator’s fees and expenses is addressed at section 57 of the Act.

11. The meaning of ‘bad faith’ depends on the circumstances in which it is alleged to have occurred. It is well established that the threshold for bad faith is a high one and that a party alleging bad faith must discharge a heavy evidential burden.[13] The High Court in Clearwater held that conduct constituting bad faith can range from dishonesty to a disregard of legislative intent.[14]

12. The costs regimes under sections 56 and 57 of the Act are plainly intended to encourage the use of adjudication as a prompt, efficient and cost effective alternative to litigation to resolve disputes arising under construction contracts. Where parties are required to meet their own costs and share the decision maker’s costs equally, the rationale is that they will act sensibly and responsibly in their own cause and only take such legal and expert advice as is necessary to properly and proportionately advance their case and rebut that of any other party, and that they will take all practical steps to minimise the decision maker’s costs.[15]

13. The legal position can be summarised by saying that an adjudicator has a limited discretion to determine liability for costs against any of the parties, which discretion should be exercised judicially not capriciously.[16]

15. The mere fact that a party is unsuccessful does not of itself conduce to a finding that its allegations or objections were without substantial merit. In  many cases both parties have a point to out forward on the matters at issue regardless of the actual determinations. 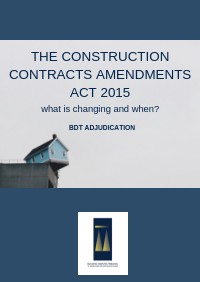 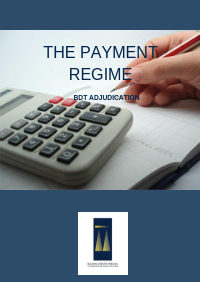 [1] It should be noted that in order to provide the LVC service on a fixed fee basis, claims are strictly limited to claims for less than $100,000 and involving no more than three issues in dispute, ie three variations, three extension of time claims, three items of alleged defective work (or any combination of these). The volume of materials that can be provided in support of any claim is also limited.

[2] Most cases involve less than ten issues to be determined. The largest case to date (by number of issues) involved 500 items in dispute – it was the equivalent of ~ 50 average adjudication proceedings in one case. In such cases, the use of a ‘Scott Schedule’ is helpful for recording the parties’ allegations/positions on each of the disputed matters, the relevant evidence on which each party seeks to rely (by reference to page or paragraph numbers) and the adjudicator’s findings.

[3] The majority of building and construction disputes are highly complex involving multiple mixed questions of fact and law. While the value of the dispute is not of itself determinant of complexity, generally the greater the amount in dispute, the more resources will be applied by parties and more complex and developed arguments and evidence will be presented as a result. In addition, parties to higher value disputes tend to ‘take every point’ and challenges as to jurisdiction and other procedural matters add to the complexity and cost of the proceeding as the adjudicator and the parties will need to respond and deal with those issues in addition to the substantive matters in dispute. In some cases, jurisdictional challenges are more complex and time consuming and costly to deal with than the substantive issues.

[4] Construction contracts typically involve large volumes of documents (plans, specifications, correspondence, conditions of contract (often with bespoke amendments), payment claims, payment schedules etc). However, not every document is usually relevant to the determination of the issues in dispute and simply providing every document that bears on the contract will be of no more assistance to the adjudicator (or the party submitting the documents) than repeating a simple argument multiple times makes it any more persuasive or compelling – clarity, simplicity and relevance are the touchstones when making submissions and providing evidence and supporting material.

[5] Any judicial decision making process involves applying the relevant statutory provisions and legal principles to the preferred evidence. In many cases the real challenge is to sort out what a party is actually claiming and why. What an adjudicator wants from a party (and seldom receives) is a cogent, logical, well-structured and presented argument with each item at issue clearly identified with references to (only those) relevant supporting documents/witness statements, and the relief sought for each item and the method by which any monetary amount has been calculated. Unfortunately, many claims lack cogency, structure and detail and as a result much time is often wasted by adjudicators trying to establish the issues to be determined and locate and analyse the relevant facts and evidence.

[6] It should be noted that the general rule (sometimes referred to as ‘the primary rule’) is that a successful ‘litigant in person’ (ie a party that is not represented by a lawyer) is entitled to recover disbursements (which include legal, lay advocate and/or expert fees, and court and process related fees ie, any appointment and adjudicator’s fees) but not the costs associated with the party’s own time and trouble which are really opportunity costs. Invoices should always be provided to prove the costs incurred. There are public policy justifications for the rule viz, the practice of awarding costs against a losing party disincentivises potential litigants and thus inhibits access to justice and confining costs to those relating to the work carried out by lawyers limits that inhibiting effect: McGuire v Secretary of Justice[2018] NZSC 116 at [55]-[56] and [82].

[7] See section 3 and in particular s 3(b) – to provide for the speedy resolution of disputes arising under a construction contract.

[8] Sections 56(2) and 57(3)(a). This is quite different to litigation where the general principle as to costs is that the party who fails should pay costs to the party who succeeds (High Court rule 14.2(1)(a)) or arbitration where costs are said ‘to follow the event’ (ie loser pays). In Bresco Electrical Services Ltd v Michael J Lonsdale (Electrical) Ltd [2019] EWCA Civ 27 the UK Court of Appeal described adjudication under the UK equivalent of the Construction Contracts Act as being “cost-neutral”.

[15] Such steps might involve among others, the clear, cogent presentation of their case including: an executive summary that captures the essence of the case (the who, how, what and why); the issues/questions to be answered and the relief (outcome) sought; the relevant background facts that gave rise to the dispute in chronological order; statements from those persons who have personal knowledge of the relevant facts; independent expert evidence to support technical arguments where a party does not have such expertise such as to be able to express an ‘expert’ opinion on the matters at issue; the provision of (only the) relevant evidence to support the claims, allegations, assertions and the statements made by witnesses of fact and opinion; calculations that establish how amounts claimed have actually been calculated including any claims for interest; and, avoiding unhelpful legal posturing and skirmishing over procedural matters that will ultimately have little bearing on the position as between the parties.

[17] The majority of those cases involve claims brought on the basis of default liability ie technical non-compliance with the regime for responding to payment claims with payment schedules in circumstances where the law is well settled and there is no tenable defence, rather than cases brought on the merits under the contract in respect of which the parties hold (often strongly) opposing views as to the facts and/or the law which require to be adjudicated upon in order to resolve the dispute as between the parties which is the whole purpose of adjudication under the Act.

[18] Where claims are consolidated the ‘claim value’ is calculated on the basis of the GST inclusive total of the amounts claimed by the claimants in each of the consolidated proceedings. Generally the costs calculated as a percentage of the amount claimed reduce as the amount claimed increases with claims in excess of $1M being at the lower end of the scale and claims for less than $100,000 being at the higher end of the scale – for example BDT’s fixed fee for LVC claims under $5,000.00 is $1,500.00 but, on the presumption that the parties will bear that cost equally, adjudication still presents as a commercially proportionate and credible process for recovering relatively modest amounts that would otherwise be cost prohibitive to pursue in any other forum when the cost is factored against the amount receivable.