1. The Parties hereby exclude all rights under Clause 5 of the Second Schedule to the Arbitration Act 1996 (the Act) to appeal to the High Court from any Award made under the BDT Arbitration Rules, including any Award or ruling of the Arbitration Appeal Tribunal (AAT).

2. The Parties further agree that an appeal may be taken by any of them under the Arbitrators’ and Mediators’ Institute of New Zealand Inc. (AMINZ) Arbitration Appeal Rules (AAA Rules) as applicable at the time of appeal from any arbitral Award made under these Rules. Any appeal must be conducted in accordance with the requirements of the AAA Rules.

3. The Parties further agree not to seek to enforce in New Zealand or in any other jurisdiction any Award that may be subject to an appeal to an AAT unless or until the time for filing an appeal under the AAA Rules has expired and, if an appeal is filed, there has been a Final Award by an AAT under the AAA Rules or the appeal has been withdrawn, abandoned, or dismissed.

4. The Parties agree that any AAT appointed as a result of any appeal under the AAA Rules, must, subject to any limitations expressed in the AAA Rules, have all the powers exercisable by a court save that the AAT does not have the power to remit the Award back to the original Arbitral Tribunal where that Arbitral Tribunal is unwilling or unable to accept the remission. In the latter case, the AAT itself in its discretion may decide the issue(s) which would otherwise have been remitted. 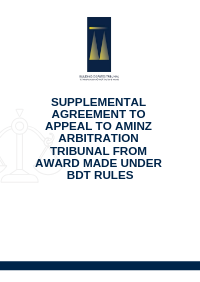 Confidentiality of proceedings is one of the hallmarks and major advantages of arbitration. However, the practice to date in New Zealand has been for all arbitration appeals to go to the High Court and thus lose their confidentiality.

The AMINZ Arbitration Appeal Tribunal provides for efficient, confidential and high quality resolution of appeals from arbitration awards on questions of law. It offers parties an alternative to taking an appeal to the High Court, and will thereby preserve confidentiality of arbitration proceedings.